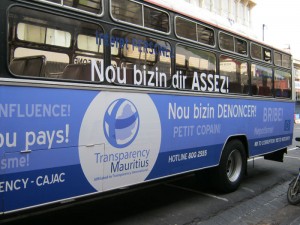 How do you define corruption?

Transparency International (TI) has chosen a clear and focused definition of the term: Corruption is operationally defined as the misuse of entrusted power for private gain. TI further differentiates between “according to rule” corruption and “against the rule” corruption. Facilitation payments, where a bribe is paid to receive preferential treatment for something that the bribe receiver is required to do by law, constitute the former. The latter, on the other hand, is a bribe paid to obtain services the bribe receiver is prohibited from providing.

In the Mauritian context, corruption is defined in the Prevention of Corruption Act. An act of corruption occurs when a public official uses his official position to obtain a personal advantage, like money or a gift, for himself or someone close to him.

The definition of corruption embraces three issues for the purpose of POCA:

2. Bribery: The offering, giving, receiving, or soliciting of something of value for the purpose of influencing the action of an official in the discharge of his public or legal duties; something, such as money or a favour, offered or given to a person in a position of trust to influence that person’s views or conduct. A bribe can consist of immediate cash or of personal favors, a promise of later payment, or anything else the recipient views as valuable.

3. Fraud: Dishonesty calculated for one’s advantage which includes a false representation of fact (whether by words or by conduct, by false or misleading allegations, or by concealment of what should have been disclosed) and also means which deceives and is intended to deceive an individual so that the individual will act upon it.

“Transparency” can be defined as a principle that allows those affected by administrative decisions, business transactions or charitable work to know not only the basic facts and figures but also the mechanisms and processes. It is the duty of civil servants, managers and trustees to act visibly, predictably and understandably.

What does TI do against corruption?

TI has been dedicated to the fight against corruption since its foundation in 1993. The basic principles of TI’s anti-corruption struggle have been defined from the start: coalition building, proceeding incrementally, and remaining non-confrontational. What does this mean?

TI believes that keeping corruption in check is only feasible if representatives from government, business and civil society work together and agree on a set of standards and procedures they all support. TI also believes that corruption cannot be rooted out in one big sweep. Rather, fighting it is a step-by-step, project-by-project process. Finally, TI’s non-confrontational approach is necessary to get all relevant parties to the table.

It is TI’s goal to define and introduce strategies and mechanisms that make corrupt practices if not impossible, at least unlikely and punishable, both on the national as well as on the international level. Raising public awareness of the problem, stressing that corruption is a problem that can be tackled and that it is not a given fact of life, is the first step in this direction. That is why TI has begun by collecting, analysing and distributing information on the subject.

TI activities around the world and in the Secretariat can be divided into awareness raising, information management, monitoring of the public and private sector, campaigning work for anti-corruption legislation, and project work.

What are the costs of corruption?

The cost of corruption is four-fold: political, economic, social, and environmental.

On the political front, corruption constitutes a major obstacle to democracy and the rule of law. In a democratic system, offices and institutions lose their legitimacy when they are misused for private advantage. Though this is harmful in the established democracies, it is even more so in newly emerging ones. Accountable political leadership cannot develop in a corrupt climate.

Economically, corruption leads to the depletion of national wealth. It is often responsible for the funneling of scarce public resources to uneconomic high-profile projects, such as dams, power plants, pipelines and refineries, at the expense of less spectacular but more necessary infrastructure projects such as schools, hospitals and roads, or the supply of power and water to rural areas. Furthermore, it hinders the development of fair market structures and distorts competition, thereby deterring investment.

The effect of corruption on the social fabric of society is the most damaging of all. It undermines people’s trust in the political system, in its institutions and its leadership. Frustration and general apathy among a disillusioned public result in a weak civil society. That in turn clears the way for despots as well as democratically elected yet unscrupulous leaders to turn national assets into personal wealth. Demanding and paying bribes become the norm. Those unwilling to comply often emigrate, leaving the country drained of its most able and most honest citizens.

Environmental degradation is yet another consequence of corrupt systems. The lack of, or non-enforcement of, environmental regulations and legislation has historically allowed the North to export its polluting industry to the South. At the same time, careless exploitation of natural resources, from timber and minerals to elephants, by both domestic and international agents has led to ravaged natural environments. Environmentally devastating projects are given preference in funding, because they are easy targets for siphoning off public money into private pockets.

Can the costs of corruption be quantified?

The short answer is “no”. Some experts use regression analyses and other empirical methods in order to try to put a dollar figure on the cost of corruption. It is virtually impossible, though, since payments of bribes are not publicly recorded. No one knows exactly how much money is being “invested” in corrupt officials annually. And bribes do not take only monetary form: favors, services, presents and so on are just as common. At most, one can research the correlation between the level of corruption and, say, democratization, economic development or environmental degradation.

The social costs of corruption are even less quantifiable. No one knows how much the loss of an energetic entrepreneur or an acclaimed scientist costs a country. Moreover, any estimated social costs in dollars would be inadequate to the task of measuring the human tragedy behind resignation, illiteracy, or inadequate medical care. A general scepticism vis-à-vis any attempt at quantifying the costs of corruption is thus warranted.

The following example illustrates the dilemma of pressing the issue into facts and figures:
A power plant is being built somewhere in the world, at a cost of US$ 100 million. It could be argued that – were it not for corruption – the cost could have been as low as US$ 80 million. The financial damage to the public would then be US$ 20 million. In practice, quite often projects are planned simply so that those involved can make huge private profits. Assuming that the power plant was superfluous, the financial damage would have to be assessed at US$ 100 million. Yet no major construction project leaves the environment untouched. The results may be: increased pollution, a lowering of land prices, resettlement of local residents, an increased debt burden for the country, etc. This calculation – probably closest to reality – is immensely complex. On a global scale, it seems almost impossible. But even if one were able to calculate the environmental damage, the increase of the debt burden and other factors, how would one measure the erosion of public confidence and the deterioration of a government’s legitimacy, which are the direct result of corruption?

Where is corruption most prevalent?

At a first, indiscriminate glance, the Corruption Perceptions Index (CPI), published annually by TI, seems to confirm the stereotypical notion that corruption is predominantly a problem of the South. While the Scandinavian countries come out on top, most of sub-Saharan Africa ranks at the bottom. The index is not intended to brand any one country, or to pit the North against the South. Rather, it is a tool to raise public awareness of the problem and promote better governance.

In addition to the question of the regional pervasiveness of corruption, the issue of corruption by sector is also often raised. The BPI provides some statistical evidence as to which business sectors are most prone to corruption. According to these results, the problem of corruption is particularly prevalent in public works and construction, followed by the arms and defence industry. The sector with the least detected corruption is agriculture.

How does corruption affect people’s lives?

Around the globe, corruption impacts people’s lives in a multitude of ways. In the worst cases, corruption costs lives. In countless other cases, it costs their freedom, health, or money.

Other examples of the impact of corruption abound: take the residents of shanty towns, who need to pay off city officials so that the little bit of living space they have built does not get torn down; or citizens harassed by police in their daily activities, having to pay left and right only to go about their business. Some bureaucracies only work if they are enticed by additional “rewards”. In any case, grand and petty corruption is making life more difficult or outright threatens the lives of many people all over the world.

What kind of environment does corruption need to thrive in?

As indicated above, corruption thrives where temptation coexists with permissiveness. Where institutional checks on power are missing, where decision making remains obscure, where civil society is thin on the ground, where great inequalities in the distribution of wealth condemn people to live in poverty, which is where corrupt practices flourish. It cannot be stressed enough that corruption is alive and well even where political, economic, legal and social institutions are well entrenched.
For more details on specific conditions, please refer to our Source Book and TI Corruption Online Research and Information System (CORIS).

Can corruption be seen as normal or traditional in some societies?

Critics argue that the fight against corruption is just another case of the West trying to impose its views and values on the South. Some go on to say that gift giving and taking in the public realm is a normal tradition in many non-Western cultures.

The debate over cultural relativism and neo-colonialism is a contested one. Where concepts like public procurement procedures are unknown concepts, bribing public officials to secure public works contracts does not exist. Norms and values are context-bound and vary across cultures. Gift-giving is part of negotiating and relationship building in some parts of the world.

It is precisely in order to account for cultural differences that TI has developed its national chapter system. People anchored in their societies have the best sense of what is customary, and what is a violation of the norm. And the abuse of power for personal gain, the siphoning off of public or common resources into private pockets is sanctioned in all cultures and societies.

Are democracy and corruption (ir-) reconcilable?

In a modern democracy, the power of governing bodies is inherent in the political mandate given by the people. Power is entrusted and it is supposed to be used for the benefit of society at large, and not for the personal benefit of the individual that holds it. Thus corruption – misusing publicly entrusted power for private gain – is inherently contradictory and irreconcilable with democracy. That does not mean, unfortunately, that corruption cannot be found in democratic systems. Temptation remains a challenge anywhere. That is why it is all the more important to put in place control mechanisms and establish systemic hurdles to prevent people from abusing their power, as TI is seeking to do. Such mechanisms are more easily drawn up and introduced in established democratic systems, however, than in newly democratic or non-democratic ones.